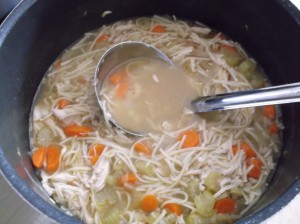 DOES ANYONE ELSE COOK soup in the summer?  I find soup the easiest thing to make, clean up, and freeze.  Chicken is still my favorite.

A four-pack of thighs is about five bucks.  That’s the base.  Just one thigh, and freeze the rest.  One thigh in a pot with a quart of water + one cup to cover what will boil off.  Peppercorns, thyme, and bay leaf.  Simmer about 40 minutes, check the chicken, maybe another 10 minutes.  Eat the chicken.

When the broth cools, strain into a quart container.  *Hey, I made the right amount again with no waste;  guess the rule is to add 25% more water of the amount of broth with which you wish to end?

After a day or two in the fridge, you can skim and discard the pancake of fat.  Sometimes I let it go a week, but longer than that, I will bring the broth to a boil again before using.

So you need the broth, an onion, and a handful of carrots and celery .  And some noodles.  And some chicken;  I’ve been using either the chicken thigh, if I didn’t eat it, or a can of Costco chicken.

Now the easiest part.  Chop the onion and throw it in the pot over some olive/canola oil. On medium.  Add the chopped carrot and celery.  When cooked, about 8~12 minutes, dump in the broth and bring it to a boil.  Add a handful of egg noodles. READ THE DIRECTIONS.  Reduce to medium simmer.  6 minute noodles?  Add the chicken at 4 minutes *use a timer* and test the noodles in another two.

After the chicken goes in, I add more thyme, salt, and pepper.  And I TASTE IT.  That is one of the tricks to cooking.  Tasting as you go.  Another is being aware of time.

Remove from heat when the noodles are ALMOST done.  By the time you tidy up the kitchen, wash whatever you dirtied, and get out a bowl, spoon, and glass of water, the soup will have come together.

EVERYONE SHOULD KNOW HOW TO make chicken soup from scratch before leaving the nest.  But in a world of instant gratification and  pop-top Campbell’s Soup, has “cooking” become more about following directions on a box or can?  A meal “prepared” according to corporate chemists clad in Tyvek jumpsuits within bright sterile labs of stainless tables and humming machines?

It’s not that hard.  Really.  Buy a store-cooked chicken.  Clean off the easy-to-strip chicken.  Throw the skin, bones, and anything else you leave on the carcass into a pot.  Add enough water to cover the bones.  I usually snap the backbone and rip any dangling parts off so it can spread out.  Put it on the stove, bring to boil, then reduce to simmer.  Simmer means just barely bubbling.  Keep an eye on it, that it does not start to boil, or else the bones begin to cook, and the taste will be *off*.  It’s already cooked once.

After 30 or 45 minutes, the broth will get a healthy color to it.  You may have skimmed some froth off the top a few times.  Time to remove from the heat;  set the pot on a cool burner (I use a butcher

block;  the scorch marks add character).  Oh, the bones and what not?  Strain the broth into a second pot (I do it while hot).  Keep the broth.  Discard the rest.  After the pot is cool to the touch, cover and gently transfer to the back of the fridge.

Remove the broth two days later; the fat will have nicely congealed at the top.  Skim and discard the fat.

Chop an onion along with a  handful of carrots and celery.  Throw a

little oil in a pot, medium heat, and the veggies.  A bay leaf and some thyme are not a bad idea.  Stir, or more accurately, turn over the veggies, every 90 seconds or so.  You want these to cook slowly, so medium may be too hot.  In under ten minutes, they should be getting “there”.  This is where I add the broth I made, and maybe some water.  You can always add more water, so take it easy on the first pour!

Bring to a boil, and add a nice handful of egg noodles or maybe a second if you have small hands.  Reduce to simmer.  After five minutes, throw in chicken (shredded beforehand).  Two more minutes, and voila!  It’s done!  Remove from the heat or it will keep cooking!

I add a little cumin before the noodles go in; you go ahead and add your favorite seasoning if you want.  Just before the boil is a good time for that.  Salt and pepper to taste at the end.  This freezes really well!

This entry was posted in Food, Food / Cooking and tagged chicken soup, EVERYONE SHOULD KNOW HOW TO, Super Size Serving of chicken soup.